Our illustrious founder and pioneer, the late Datuk Seri Panglima Hong Teck Guan was a great man. He was well loved by his family members, staff, friends and his business associates. He was a generous philanthropist even before others have thought of it. Helping others less fortunate through education was perhaps his greatest gift to the society.
His story was a fascinating one. With little education following his father's death, he came to kedah, Malaysia to work and study in 1926. Some years later, he went to Kuching, Sarawak to learn fishing from his uncle. At his time, his entrepreneurship and ingenuity showed. He began to own fishing boats and his business empire started from this modest fishing business. He ventured far out to sea where others dared not. But, his luck ran out when he was trapped in Sandakan due to the outbreak of the Second World War and he could only move southward to Tawau, Sabah.
By thinking ahead of others during the Second World War, he traded with the allied forces and made enormous profits. His business empire expanded to various towns in Sabah. Ever conscious of the need to help others less fortunate than him, he co-founded Yuk Chin Chinese primary school providing many with decent education. This school is now a premier primary school in Tawau, Sabah. His expansion enabled him to own a fleet of ocean liners. Together with other prominent business associates and Chinese social activities, the Sabah Chinese High School was formed, providing again thousands of high school students' good quality education. Some of his own grandchildren graduated from this premier school, which has attracted international students mainly from Indonesia. His contributions and his many other philanthropist activities attracted the attention of the Sabah state government and he was duly awarded the Datukship by the state governor.
In 1957, he commenced commercial planting of cocoa tress in Quoin Hill. He was a pioneer in cocoa planting and made handsome profits from it. In 1976, he boldly set up a cocoa manufacturing plant in Tawau, Sabah. Agriculture was his lifelong passion. Teck Guan is where it is today because of his foresight in investing heavily in agriculture.
His life was modest. He lived on the top floor of the office building, a typical 4-storey building. He would walk down to his office early morning, clear his work and would go out for breakfast with his old friends. He even went to the nearby fish market when he had time to buy fish for the family. But, he was a hard working man and well respected by his managers and staff. He continued to visit his plantations even in advanced age. In 1981, he set up the Hong Teck Guan Trust to ensure his family businesses continued to flourish without interruption. Until his demise in 1997, he still worked right to the end and his influence will be felt long by his family members and inspiring them to scale greater heights in years to come. Teck Guan is now ably led by his successor, the executive chairman, Datuk Hong Ngit Ming.
Copyright 2005 Teck Guan Holdings All Rights Reserved. 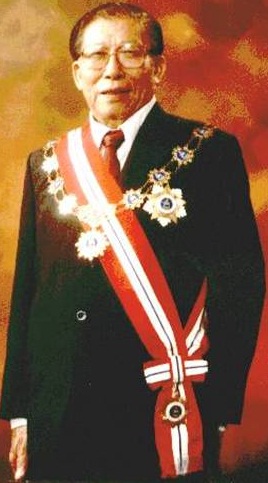